Gijon (or Xixon in the local language) was originally a Roman settlement and has a rich history from Roman times through to the 16th C when it became established as a port and in more recent times. There’s still  evidence of the Roman history including Roman baths although we didn’t get to see them – coming from a place where Roman ruins are everywhere we get a bit blasé about them unless they are exceptional.

This is  the largest town in Asturias in northwest Spain, a seaside town sitting on the Cantabrian Sea and so has a maritime and fishing history and today is a departure point for cruises. However, the town doesn’t always get a great write up as it’s also an industrial region producing iron, steel and chemicals – and coal is exported from here. And its not the prettiest in terms of aesthetics – there are plenty of old churches but otherwise the architecture is less than impressive with areas of modern-ish high rise flats and offices mixed in with older commercial and government buildings. So we did think twice about visiting  – but we did visit and we are glad we did – although its fair to say we see no reason to return!

We liked the place albeit’s  its a working city with a definite working class feel to it – maybe that’s why we liked it. It’s  grittier than other Spanish cities we have visited – definitely grittier! And with  Festival taking place at the time of our visit, it was fairly lively and the cider was definitely flowing!

The people of the Galicia and Asturias north west corner of Spain are of Celtic origin (no they are not immigrants from Ireland or Scotland) – they have their own language and music and bagpipes are a traditional instrument. You probably know already that Gijon is the home of the International Bagpipe Museum – unfortunately we missed it….

As always the historic quarter, the original village named Cimadevilla, is the highlight with its narrow streets and little squares littered with bars and restaurants, standing on a peninsula leading uphill  to a park, Cerro de Santa Catalina with a massive and monstrous abstract concrete statue representing I know not what. There are great views to be had from here but keep on walking around the peninsula and you arrive back on the mainland and the main promenade overlooking the main beach, Playa de San Lorenzo. The beach is 1.5 metres long and great for families although its not our kind of beach – just too crowded although, to be fair, this was early August, peak holiday time.

Beyond Playa de San Lorenzo there are walkways giving great sea views with various sculptures to be found along the way including Monumento a la Madre del emigrants – a memorial to the Asturias emigrants who left from here for the Americas and other parts of Europe. This was really lovely walking and a highlight for us.

The people here were very friendly but it’s a very Spanish resort and there’s very little English spoken.  There was some kind of Festival taking place while we visited and it was clear how important music and dance and drink is to the locals. Again like elsewhere in the region, food here majors on fish,seafood, meat and cheese. Seafood platters alongside hearty stews like Fabada .Fabulous.

The local tipple is cider, of course and at the time of our visit, with the festival on, there was a lot consumed. Its importance is honoured with a cider bottle tree in Cimadevilla.

This is another place that isn’t exactly on the standard tourist trail unless you are actually touring. – what I mean is that it really isn’t a destination in itself for overseas travellers.The weather in this part of Spain, in the entire region really, is less predictable than elsewhere in Spain. It’s a very green area as a result of high rainfall – the weather wasn’t great during our visit although we did have one nice day. The climate along this coast attracts predominantly Spanish tourists who visit in July and August to escape the high temperatures elsewhere in Spain. It’s quite different from many of the many Spanish towns and cities we have visited by now but we liked it – a lot!

Following our few days in Leon , next stop was Oviedo , the capital city of the Asturias Region of Spain. We made the journey by train through beautiful countryside on a fabulous day.We stayed at the modern Hotel Monumental and enjoyed our stay.

Oviedo is the original start point of the Camino de Santiago as it was from here that King Alfonso  II (791-842) set out to verify the remains of Saint James at Santiago de Compostela.It isn’t a big city but its very pleasant with a very nice historic quarter with lots. of bars and restaurants and inevitably there’s an impressive Cathedral.

Here again we enjoyed the food and drink which majors on seafood , meats ,sausages and cheese.The dish of choice here is Fabada and I loved it – a stew of  asturias white beans with blood sausages ,ham and pork sausages – but we also enjoyed great fish stews.

I was pleasantly surprised to find a Craft Beer shop here but the local tipple in this region is cider.There are cider bars  which specialise in cider , of course , but its served everywhere and most of the locals seem to drink it. Watching cider being served is rather amusing ; the cider isn’t carbonated and is flat and can be bitter tasting and so the drink is poured into the glass from a height of two feet or so in the air into a special glass with the objective of  “breaking” the cider to give it an injection of  bubbles. The server only pours a mouthful of cider ,passes  the glass to the customer and then moves on around the room pouring more drinks for whoever is ready for another mouthful! Rather strange. The pouring is usually pretty accurate and is done with a straight back and a serious expression on the face but it doesn’t always quite all go straight into the glass and inside restaurants the pouring is usually done over a receptacle to catch any cider that misses the glass!

This is another town that we really enjoyed.Very friendly with some great food and drink!

Whilst we always love the historic quarters of the Spanish towns we visit, there is often a pleasant more modern city for shopping and strolling. Oviedo has a very smart and pleasant commercial area still with plenty of bars and eateries ,  a very nice park and ,  of course ,  shopping.Oh ,and some interesting statues…

Next we travel north by train about 15 miles , but still in Asturias , to Gijon ( pronounced hi-hon – sort of).

The city of Leon is capital of the province of Leon in northwest Spain and another town on the Camino route to Santiago de Compostela.Its a beautiful city full of history having been founded by the Romans in the first century BC with a fabulous historic centre of narrow streets packed with bars and restaurants.Its a full on place for food and drink and night life – a great vibe and we loved it!

We stayed at Hospederia Moastica Pax , a 3* hotel in the main wing of a converted monastery that is still active. We liked this hotel a lot , comfortable rooms with nice courtyards in a beautiful old building.

Lots and lots  of lovely old buildings here but the highlight for us was the 13th C Leon Cathedral with its 125 incredible stained glass windows – have to include loads of photos of this!

We spent 3 nights here but we could have stayed longer – a top place. 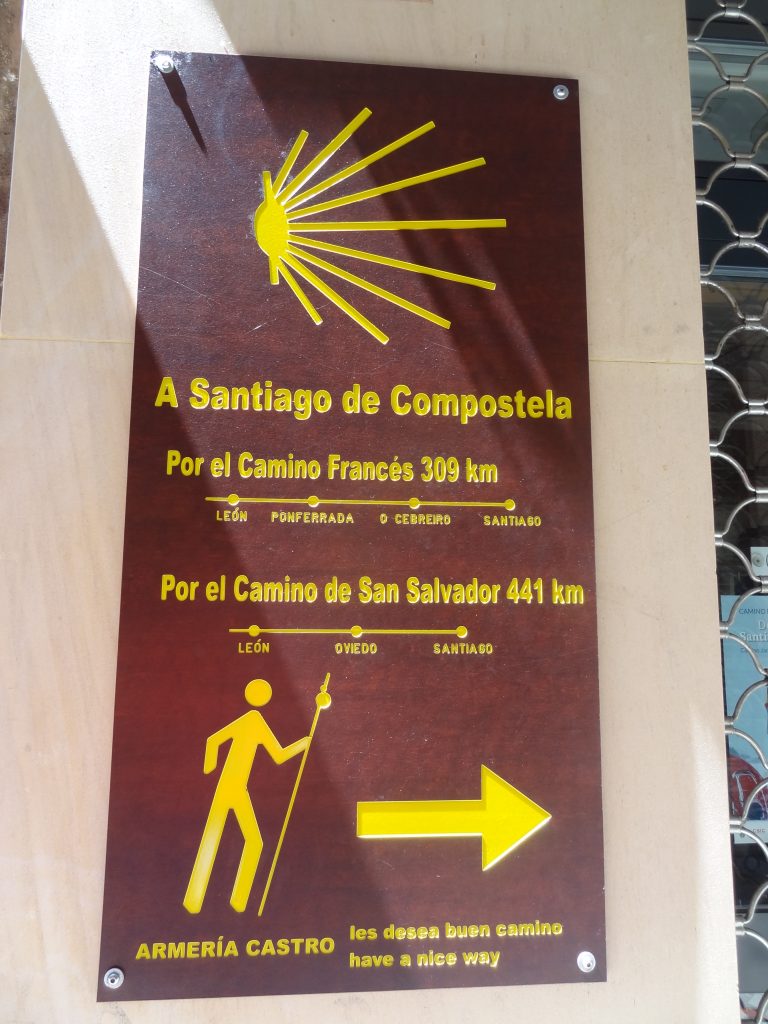 A Coruna is a port city sitting on a promontory in the Galicia Region of northwest Spain. Its a place that many people will never have heard of except for football fans – Deportivo de La Coruna is a professional football club once playing in La Liga but currently in the Spanish Second Division.

A Coruna (and also Ferrol nearby) is where the Camino Ingles began where medieval pilgrims disembarked from their boats to start their treck to Santiago de Compostela. It’s also  famous for a Roman lighthouse – the Tower of Hercules and some standing stones ,Menhires for Peace , which appear monolithic from a  distance but were  actually built as recently as 1994 as a tribute to the Celtic heritage of Galicia.

Its a pleasant town with an interesting port , at least one nice beach that we saw , a commercial centre and some interesting architecture with a medieval area ,like all the towns in N W Spain.

We stayed in the commercial area at the pleasant Moon Hotel   , conveniently beside our favourite Department Store El Corte Ingles. From here its a short walk to the Paseo Maritime , a 24km long promenade which gives some very nice walking around the promontory on which the city sits.

We didn’t enjoy the best of weather during our visit but its fair to say that this probably isn’t a town which overseas visitors would visit other than as part of a tour of the area or as a port of call on a Cruise .We enjoyed the visit nevertheless but 3 nights here were enough. Next stop Leon.

There is quite a large historic centre contain the Cathedral itself and many historic buildings in narrow winding streets. Sadly much of the historic centre is a tourist trap lined with bars and restaurants and shop after shop selling tourist tat.This is also the site of the University of Santiago de Compostela and the numbers of students and young visitors result in a busy and noisy nightlife .This is a lovely city but for us spoilt by the crowds .After 3 nights here we were ready to escape the herds and move on to the far north and the town of A Coruna.