We left our Omarama motel room sometime after 9.00 to drive the ninety or so kilometres to Aoraki Mt Cook. The next couple of days was all walking and we really needed decent weather but the morning was dull with rain threatening and we feared the worst.

Aoraki Mount Cook is the highest mountain in New Zealand lying in the Southern Alps which is the mountain range which runs the length of South Island. It consists of three peaks known as Low Peak, Middle Peak and High Peak with the Tasman Glacier to the east and the Hooker Glacier to the west.

The Mountain is obviously steeped in climbing history having been first conquered by a group of New Zealand Mountaineers Fyfe, Graham and Clark in 1894 when they made the ascent at fairly short notice once they learned that an English climber, Edward Fitzgerald was on his way to claim the prize. Fitzgerald was piqued to learn he had been beaten to it and refused to make an attempt. Instead he climbed other nearby peaks with his swiss Guide Matthias Zurbriggen who himself went on to make the first solo climb of Aoraki Mount Cook in 1895.

Aoraki Mt Cook came to be known by this name in 1998 when the Maori name Aoraki was added to the name given by the Europeans. All very politically correct but its a bit of a mouthful and from here on I shall refer to it as AMC!

The roads were quiet as always in New Zealand and making good time, we made a small diversion off the main highway to take a look at Twizel about half way en route. In our research about this trip, Twizel didn’t strike us as being a must see place; rather one of those places that it might be necessary to call into for provisions or overnight accommodation en route to somewhere else, but we were in time so decided to have a shufty.

Twizel is a new town built in 1968 to house construction workers who were building the Upper Waitaki Hydroelectric Scheme. This massive scheme consists of 50km of canals, two dams and four powerhouses and at the peak of the project in the 1970’s the town had a population of around 6,000.

As the intention had been that the town would be “de-constructed” and revert to farmland on completion of the Scheme, many of the buildings and much of the infra-structure was and still is built on a “temporary ” basis. For example, many of the buildings are prefabricated and all power services, cables etc are overhead rather than buried. In the event many of the families who had settled here during the Project decided to settle there and there is now a resident population of around 1200 which grows significantly in the tourist season. The town itself isn’t particularly attractive given its temporary nature but the surroundings comprise wonderful mountain, lake and river landscapes.

As we neared AMC, we stopped briefly at Peter’s Lookout on the shore line of Lake Pukaki to get a better view of the Mountain and happily we found that the weather ahead appeared to be clearing although the Mountain itself ws still shrouded in cloud.

However, the view below was our first view of the Mountain itself as we approached the village. Not exactly promising but miraculously most of this cloud cleared as the day went by.

We finally arrived at AMC Village around 11.00 am. The sign below pointing out facilities in the village centre is perhaps a tad mis-leading as it might suggest a village somewhat larger than the reality. Apart from the Hermitage Hotel and a handful of other accommodation providers, including a large modern backpackers hostel with bar and restaurant, there is very little in the village, not even a supermarket. 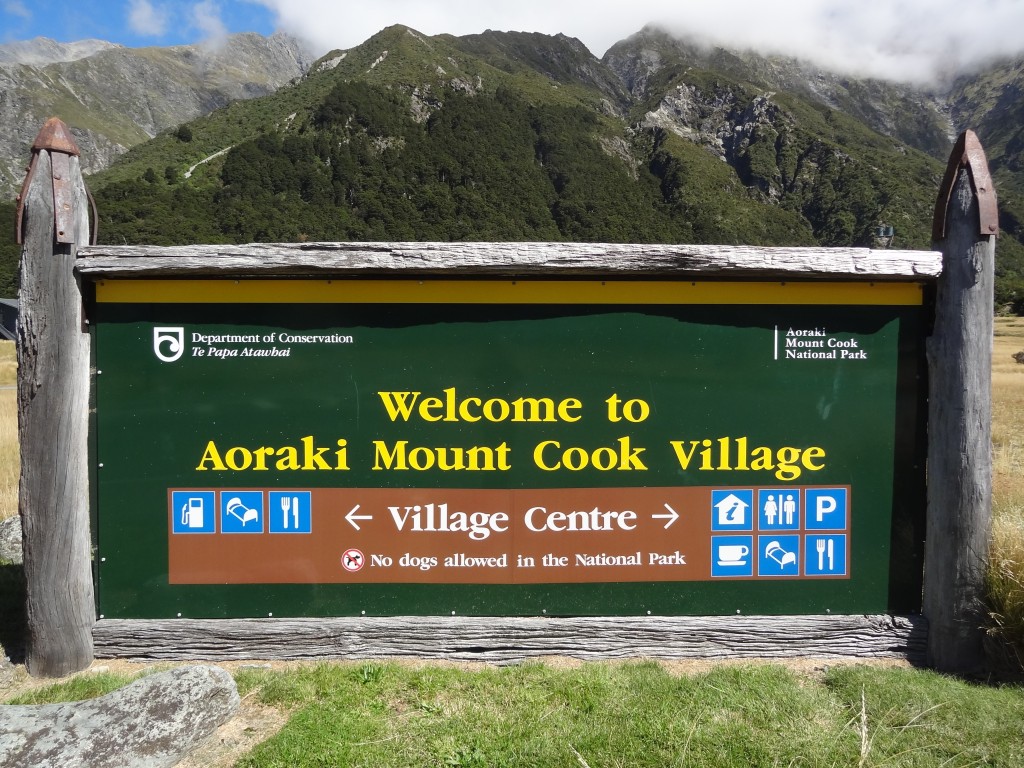 The Hermitage itself is quite a grand affair. 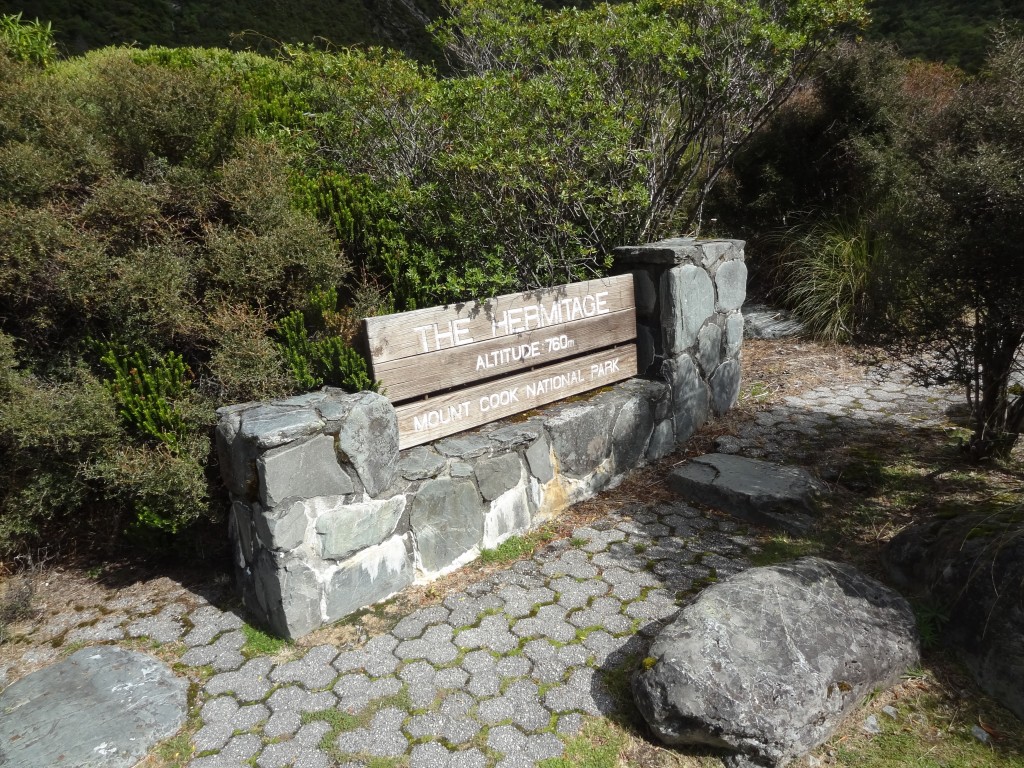 After a look around the Hermitage we booked into our accommodation at Mount Cook Alpine Lodge. A nice room, albeit a tad small but with a good view of the mountains.

After a quick lunch we went off to find the start point of  the Kea Point track which would take us to the Mueller Glacier moraine wall. This is an easy walk of around three hours from our motel. It’s a fairly flat walk through grassland and scrub but nevertheless there are stunning mountain views wherever you look. It would be a great introduction to the area. 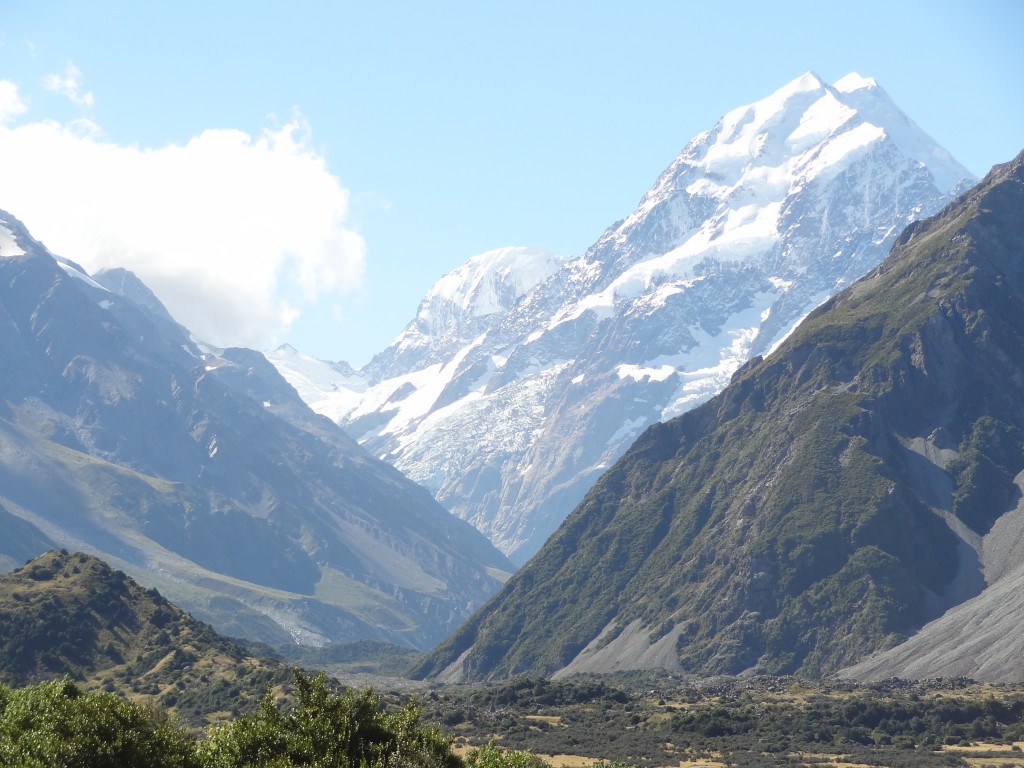 We finished this first walk with a few drinks at the backpackers motel which was well priced and with a decent menu before retiring for the night well and truly knackered.

On Day 2 we would complete the longer (about 5 hours return from our digs with stops for photos) and more challenging but still easy walk along the Hooker Valley Track to the source of the Hooker River.  This is an amazingly beautiful walk and one of the most popular walks in New Zealand and we set off early – for us – in the hope we would miss most of the crowds. It worked; we had the outward walk to ourselves for most of the way and didn’t hit the crowds until  our return walk.

This walk is through much more varied landscapes but still mostly flat on good tracks with some boardwalk through marshy bits and steps in other parts where there is a bit of up and down. There are 3  long suspension bridges en route crossing the beautiful glacial river rushing below and the scenery is just awesome! There always seemed to be a view on the other side of the bridge – the pictures below will show you what I mean…. 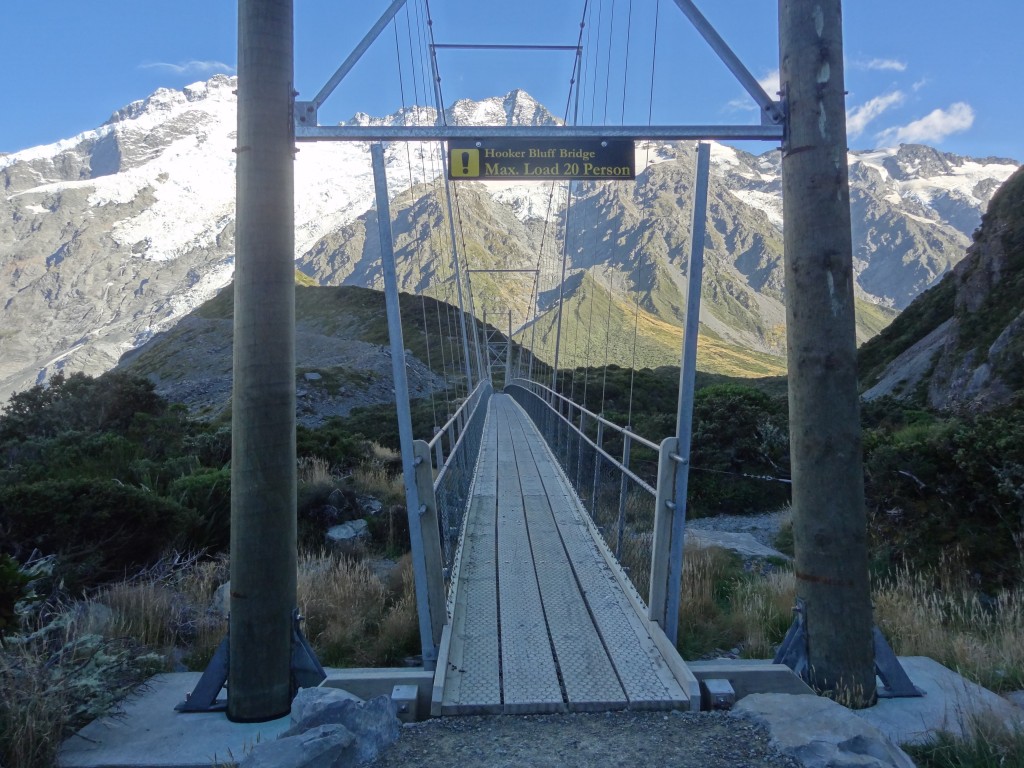 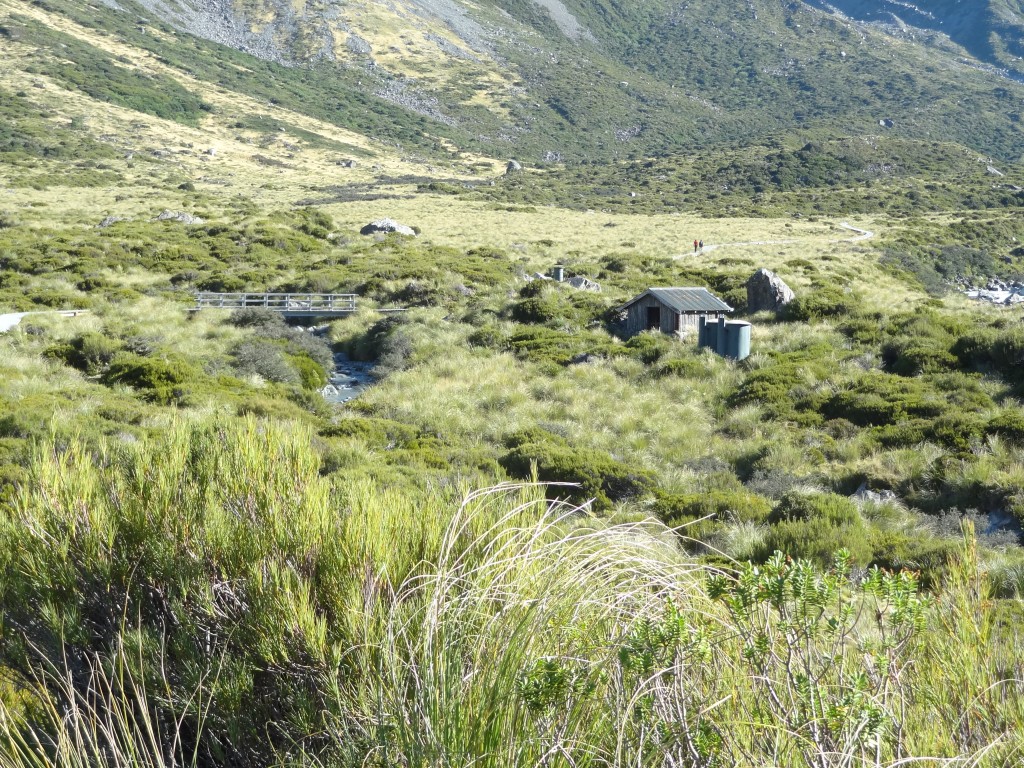 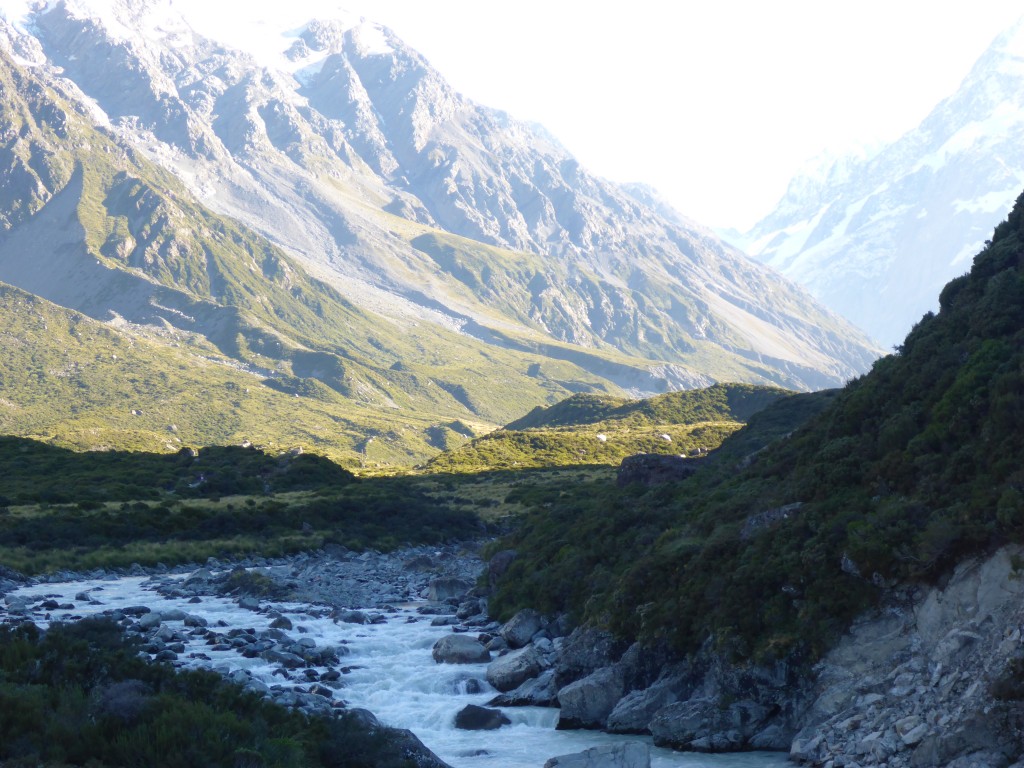 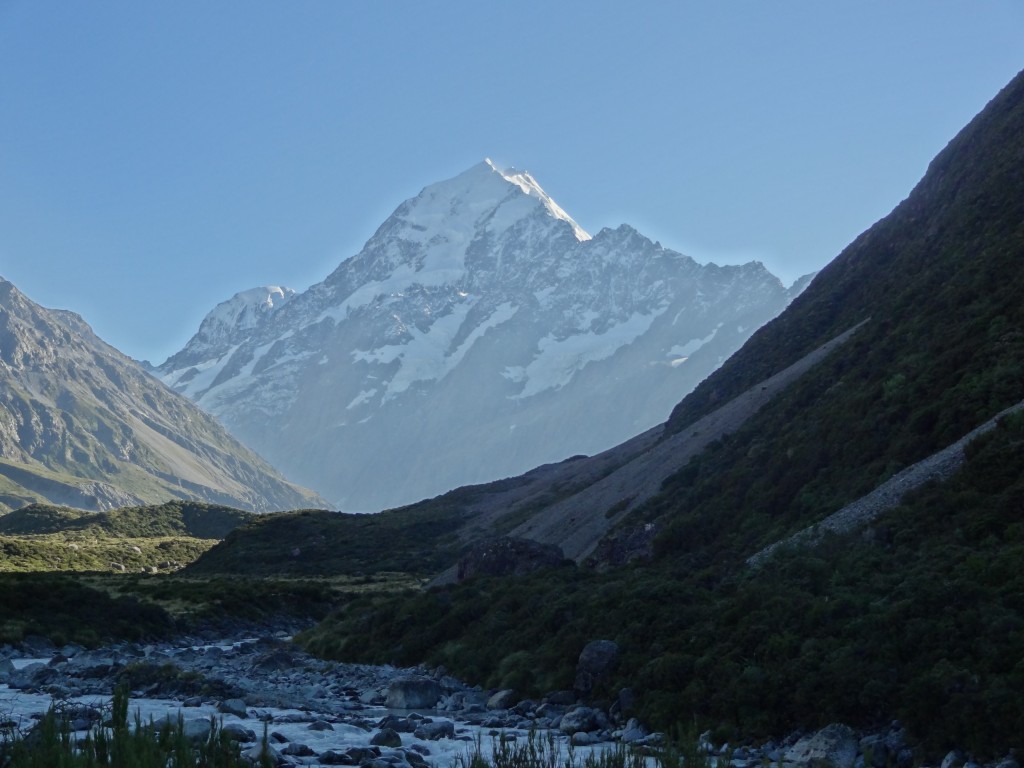 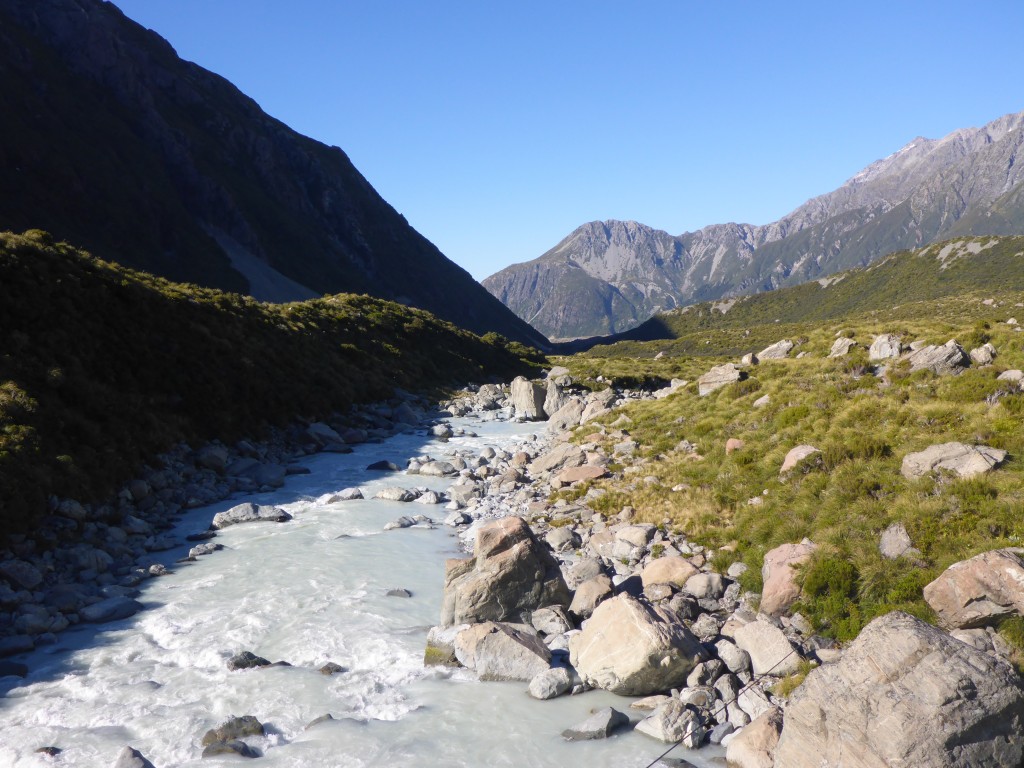